Genesis says the serpent first appeared
in the Garden of Eden
with hips, knees, and feet.
But then God cursed it to belly-crawl,
stripping off its limbs as punishment
for Satan possessing it,
crawling into its body to trick humanity,
locking snake eyes ultimately
with God in the garden standoff.
It wasn’t the animal’s fault.
Lucifer’s handoff of the body
back to its owner
came with a curse from their Creator
who said to the serpent:

You will be hated now
hidden in the grasses
your slick slice through the dust
will disgust the human masses.
Twisting around your brother now,
food your motivation.
And you will remind my humans how
Satan whispers, still, temptations,
to lure them into lust
and lay them in the grave—
because sin is sexy.

So your tail will flagellate like sperm
the female body craves.

But how fair of God to settle the score
by forcing the innocent serpent
to belly crawl forevermore?

I know that God is just.
I just don’t understand His ways.
Genesis says that although sin cursed the Earth,
God would send His Son to save.

But if I were a squirmy reptile
expelled thin and limbless through my mother’s bowels,
would I resent this dragging my
underside through the dust?

If I were a scaly culebra
winding my way through the world,
would I be pissed I was wrongly punished?

No.  Because God grants creation adaptation.

If I were the snake,
I too would be granted
rows of scales like fingernails
to unshock my journey over the gravel,
I too would be given
the gift of skin-shedding—
the ability to undress down to fresh keratin,
leaving a delicate sock hanging
over the bark of tree limbs.

If that were me,
I would belly-crawl contentedly,
I would slither and crawl as my lot in life,
because not questioning why I slither—
but simply slithering
would be the highest purpose of my existence.

Posted by Catherine Zickgraf at 12:11 AM 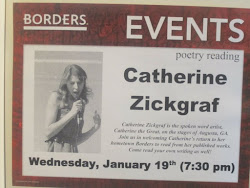